This page is no longer active as of 2019. Most blogs have moved to http://www.erikscollectables.com

New blogs are added there. Gerrits travels part 1-6 are still here but will eventually also be moved there.

Thanks for visiting and see you on the other location! Erik 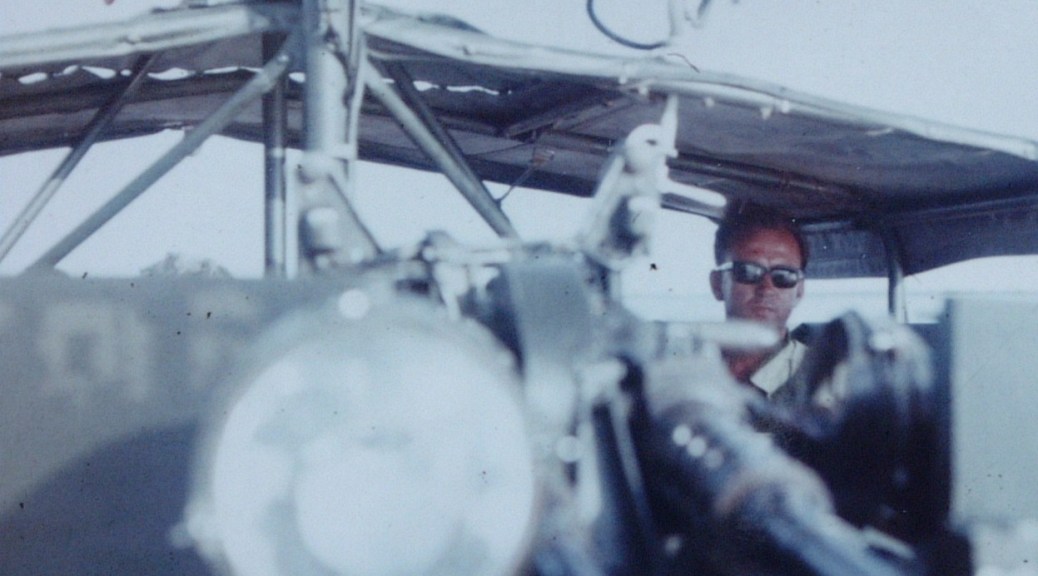 A Dutchman in Vietnam!

Gerrit spent the first half of the ’60s in Greenland working at the BMEWS base, one of the coldest parts of the world. You can read more about him there in the earlier blogs about him: Gerrits Travels – Part 1 – BMEWS at Thule Air Base – Greenland The second half of the ’60s he spent in tropical Vietnam working state related contracts.

As he passed away I am not sure I will ever know what he did there exactly. He worked in some capacity for RMK-BRJ the largest building conglomerate active in Vietnam during the war. You can read more about their history here: RMK-BRJ wiki

He had some form of medical education in the US (he stated to be an MD but I found no actual proof for this though) and he worked in some medical capacity it seems, probably in the line of Health and Food safety for RMK-BRJ.

Below a photo of his kit-bag (his original Dutch one, not a US version!): GHM Medical Department / Facilities & Operations RMK BRJ / 6th Division Vietnam 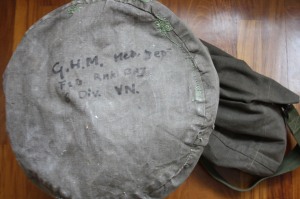 Here some paperwork form his time in Vietnam:

As he spent more than 4 years in Vietnam he witnessed most of the war and not always from a safe distance! On several occasions he risked his life during the line of work. As can be read on the Wiki regarding RMK-BRJ with more than 52 emplyees killed.

I’ll share here some of my favourite pictures from his collection (these are mainly prints I took from the slides he made).

Do you something bulbing inside his white shirt? He always carried a grenade there for safety reasons, but not visible….

Driving a river boat, he went with the river forces on patrols on several occassions, just for fun and he spoke French fluently so he could help out in communications too. 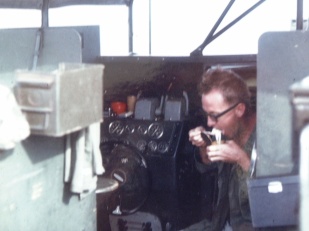 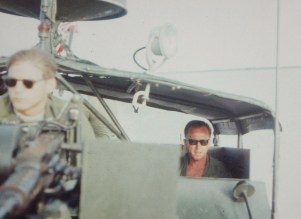 With the Marines he had a Dutch friend there too, recently emigrated to the US.

And some random photo’s: 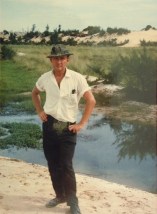 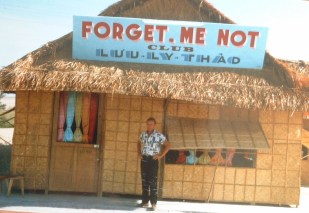 Some of the items he collected during this period: 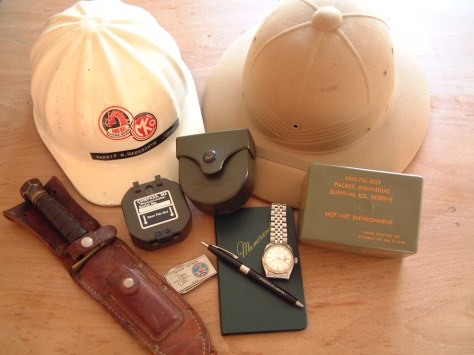 The Marbles pilots survival knife he already got in Greenland and brought to VN. 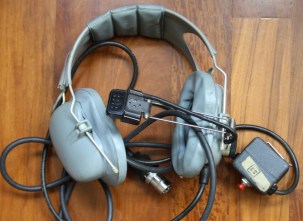 The Rolex Datejust he bought for his Birthday during R&R in Bangkok! It can be seen on the stairs of a friends house in Saigon. He is guarding the house with his M1 with double (taped together) banana magazines. 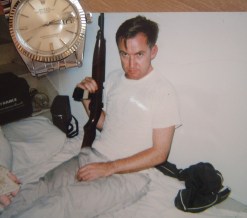 A relatively rare item among his military gear are these: Military Survival Kit – Hot Wet environment. Mainly issued to Special Forces in Vietnam – complete with all items including flare gun and amphetamine tablets (also called no sleep tablets). For more info see http://www.vietnamgear.com/kit.aspx?kit=370

At least one more episode to follow! Congo and Persia are the next stations in the trip…

You cannot hide your heritage 🙂

For the earlier parts you can go here: Gerrits Travels – Part 1 – BMEWS at Thule Air Base – Greenland 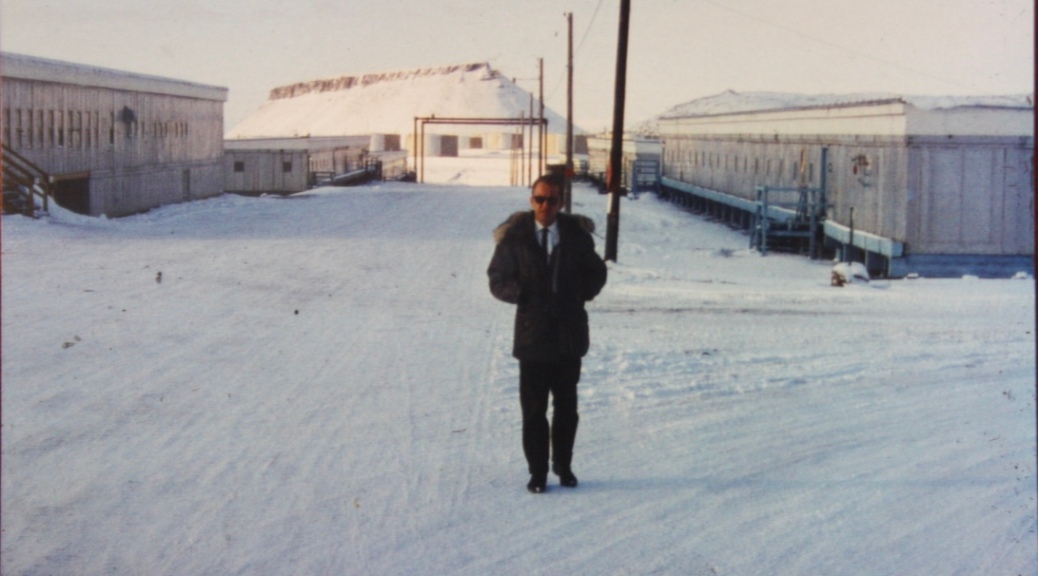 In the years Gerrit was in Thule the base was still quite new and still being built. It was not a place of luxury but of a very simple life, work, eat, sleep, repeat….

Here some pictures of that simple life in the harsh conditions of the Arctic.

As on any base there was also a Chapel for the churchgoing part of the staff. And of course Xmas specials on the menu. 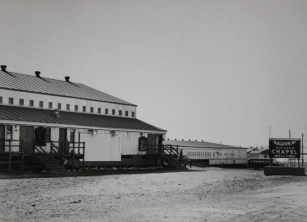 Dormitories were quite simple with small rooms. Not sure if private rooms were available to all personnel? 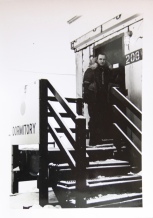 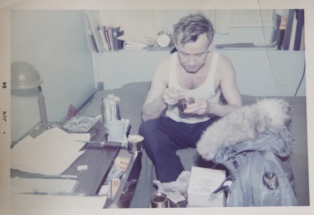 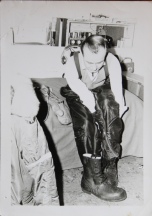 Weather conditions were very harsh, even in spring and summer

Describing weather conditions and leaving his Jeep near the other Barracks for better protection against the snow.

And some more snow storms in spring… 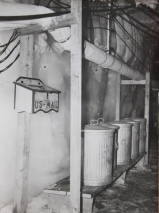 And of course US Mail!

Later after the 1968 accident with a B-52 there was radiation but no idea what the radiation could have been before 1965?

Gerrit somehow got the opportunity to make a trip with the local inhabitants, the Inuit or as they often were called in that time Eskimo’s. Today there are companies offering dog sled tours in that area but looking at these photo’s it was not a commercial business yet in the 60s. Dundas mountain is quite near to the Thule site so it appears on many pictures. As the picture below show the trip started from BMEWS itself, four of the five radars can be seen here and of course the dog led sled!

As I have no details on the trip itself from Gerrit it was good te see that on some pictures he made captions of what we can see!

The caption reads: An Eskimo from Dundas with gun and screen for the seal hunt

It seems he made the trip with some unknown friends 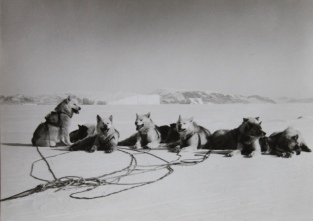 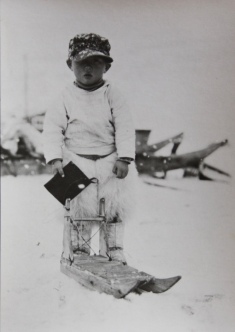 Two photo’s of “locals”, really love these, could be in National Geographic…

Also during his time in Vietnam Gerrit always had good relations with local people. Not being in the military himself probably gave him some more possibilities for this. 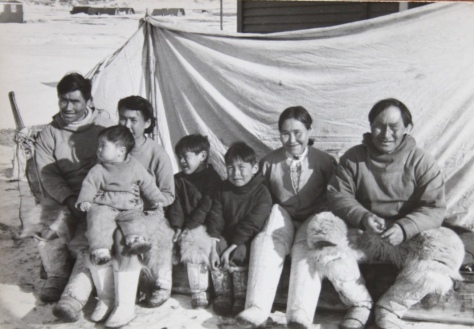 The family that took him on the trip? 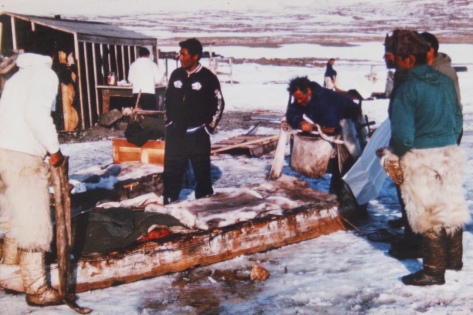 Skinning after the hunt, pole fox?

On an Iceberg 4km from the coast

Dundas from the seaside 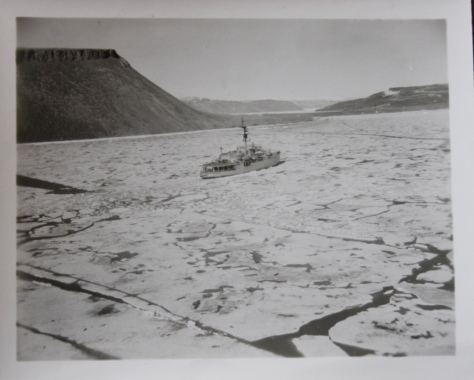 This wildlife booklet must have helped, he studied it well. He brought even some items with him that are no longer here like a Narwal tooth, from the unicorm of the seas…

Prized possessions of an Arctic Traveller

Gerrit lived as a civilian on the Air Base. It seems that in his role he had acces to military supplies and also to the military shop, the so called Base Exchange. A place it seems were also luxury items like Omega watches could be bought ore ordered.

Next to the photo’s I have some of his most prized possession of that time, his parka, knife and watch. I will discuss them here as they are quite unique…at least to me!

In most photo’s he can be seen wearing his N3B US Air Force cold weather parka. Next to the Parka I have the matching trousers and a pair of aviators fur lined boots…

He also had a Marbles Jet Pilot survival knife that he kept on using in the Vietnam war. Marbles designed the knife but they did not get the Defense Contract. So probably this is a private purchase from the Base Exchange. In any case it is a rare knife by now.

And here is Gerrit wearing and using the knife! First in his dormitory with the parka on the chair, the knife on the table, used to open a can? And plenty of Kodak films in the drawer… 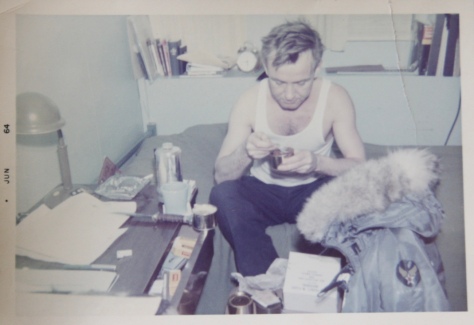 And here worn on the belt during his trip to Dundas 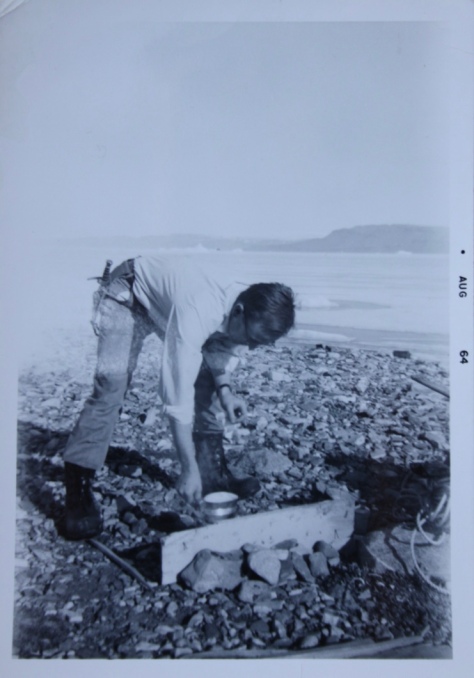 And my personal favorite as it can still be used his Gold Omega Seamaster. Bought January 1963 on the Base Exchange!

So far the prized possessions of Gerrit. Next up in Part 4 is the Eskimo Sledgetrip to Dundas!

Obviously Thule was an Air Base next to the BMEWS radar station. In the period Gerrit lived here (’63/’65) he was living with 4683rd Air Defense Wing. This unit was formed in 1960 and discontinued in 1965 so Gerrit witnessed most of its lifetime.

They flew with the Convair F-102, Delta Dagger as pictured below in Thule

I am not sure how secret these things were back in that period but Gerrit was always proud of his Security Clearance (he said the highest a civilian could get). I did not see any of the NIKE missile pictures until after he passed away and I received his box of Greenland pictures….

Several pictures of the NIKE Hercules missiles, ready for action…

Next to the Jets and Missiles there were other planes….

Probably a Catalina, adapted with ski’s.

And maybe a supply drop?

And of course the Fire Brigade in case of problems….

And there were helicopters too!

With special thanks to Arno for the identification of the planes and missiles!

More to come in Part 3 so stay tuned…

Missiles in Greenland, war in Vietnam, problems in Persia…..

During my teens in the early 80’s I came to know Gerrit. He was an acquaintance of my parents. He had stories and photo’s of countries and places where nobody else I knew had ever been. He was a bit of an adventurer so there was much to tell. Being only a kid much of this information was lost over time. After Gerrit passed away I inherited many of the photo’s and items which had interested me so much in my youth.

In this new series of blogs I will share some of these photo’s and items from his travels in the 60s, mainly his life in Greenland and Vietnam. Both working as a civilian contractor for the US military. 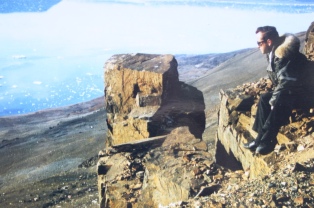 Gerrit was born in 1929 in Deventer, Holland. In the early 50s he studied Hotel Management in Switzerland and soon after emigrated to the US where he became a citizen, after his retirement he returned to Deventer in the Netherlands our mutual home town.

In the 50s and 60s of last century the tension between the western world and the east, especially the Soviets was building up. The war in Korea, the Cuba crisis and later the Vietnam war were al very visible examples of this. The cold war was also one of fear for a Nuclear war with Ballistic Missiles flying over the oceans. If you could stop the enemies missiles you could win this potential war….

In order to find and after shoot down enemy missiles the US started the BMEWS project in 1959 which was completed in 1964. The main contractor for the entire project was RCA, short for Radio Corporation of America. The contract was close to 500 million USD initially. They were building enormous radar sites with linked computer systems. There was a total of 12 radars at several sites, Thule being the biggest with 5 of these radars the location was known as the J-Site. Next to the Radars there were jets for interception and NIKE missiles but I will get back to that later.

Gerrit in front of the BMEWS Radars in Thule

In the years that Gerrit worked in Thule (63/64/65) everything was aimed at completing the project as soon as possible in order to guarantee the USA a higher level of safety against the Soviet threat….

As mentioned he worked for RCA, probably in the role of facility manager (food and accommodation for the RCA employees). Here his address at the time as stated in the postcard also seen at the top of this blog.

And here a folder for new RCA arrivals at the Thule BMEWS project. On the inside he describes the location of his sleeping quarters in spring so this is probably from 1963. The location of the dot on the inside corresponds with the map on the outside.

I have planned several more episodes on Thule: missiles and planes; life on the base; trip to Dundas and some of Gerrit’s items of that period. So stay tuned 🙂 And after that we move to Vietnam for a view of 5 years of war….

For new blogs go to: www.erikscollectables.com